Of course more critical systems would might have more IV&V than less critical ones (which need none) One customer with severe security issues spend about 40% on top of development for IV&V.

Full IV&V is not just independent testing but is an independent look at requirements sufficiency and traceability, design, coding, and testing as well as independent text.

A Titan briefing on the Internet showed IV&V as 35 to 45% http://www.dtic.mil/ndia/systems/Rogers2.pdf

The book “Independent Verification and Validation By Robert O. Lewis”

shows IV&V being up to 18% of software development cost. 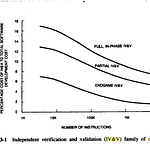 Wallace and Fuji (1989) report mixed results on the effectiveness of independent verification and validation (IV&V), largely due to the fact that IV&V adds 10 to 30 percent to development costs while saving 0 to 180% of IV&V costs.

Go Back
Previous
Next

Zoom Webinar: Thursday, October 28 @ 10 am PT / 1 pm ET Video will be made available to registrants … END_OF_DOCUMENT_TOKEN_TO_BE_REPLACED

In response to the pandemic, plenty of organizations had to re-invent themselves or significantly change the way they do business. … END_OF_DOCUMENT_TOKEN_TO_BE_REPLACED

Read More
2018 Canna | Development by TDGR.
We use cookies to analyze website traffic and optimize your website experience. By accepting our use of cookies, your data will be aggregated with all other user data. PersonalizeAcceptReject
Manage consent